I spent the last weekend at a mounted police de-spooking clinic.
For those of you who don't have horses, the horse is the flightiest domestic animal.
They have no defenses such as horns, antlers or tusks,
so their main defense is flight. 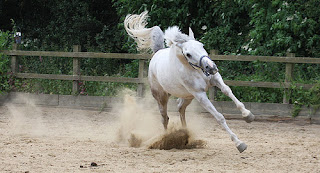 And sometimes when they are fleeing, a swift kick toward the perceived danger helps.
And getting rid of that load on their back helps too.
All of which presents a problem for the rider! 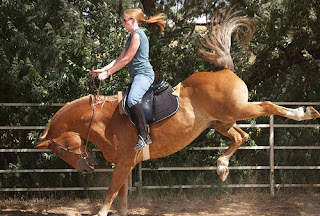 Horses can be spooked by something as simple as a plastic bag blowing across their pasture.
Their motto is "Run from danger, then figure out if it is dangerous".
So I decided to desensitize Jasper to some possible dangers.
Early in the clinic, we encountered some pretty easy obstacles. 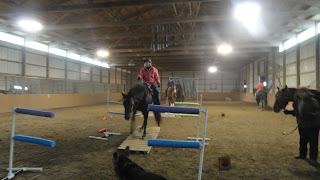 Walking over a plastic tarp is scary to a horse.
As is walking on a bridge.
Unstable footing is dangerous to a prey animal.
If you go down, you are dinner.
Swim noodles simulate things brushing against them on the trail.
An inexperienced horse will spook at that.
The bridges were then propped up in the middle, 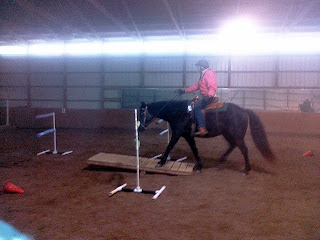 making a new obstacle, a teeter totter.
Next, visibility was reduced by using smoke bombs. 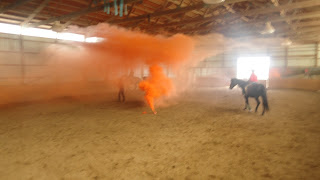 Humans can see better in smoke than horses,
so your horse has to learn to trust you to guide him through the smoke. 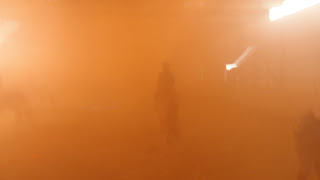 It wasn't easy.
Next, we exposed them to scary sounds, whistles, sirens, & loud speakers.
And taught them to escort a police vehicle around the arena with lights & sirens blaring. 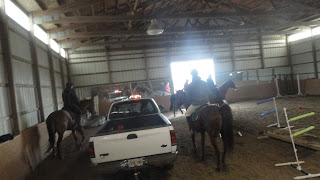 As the course progressed, the obstacles were combined
so as you crossed one, you immediately stepped on, under or through the next. 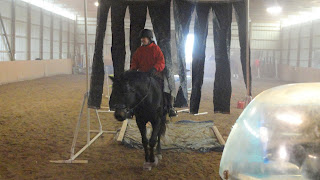 And finally the instructor added fire. 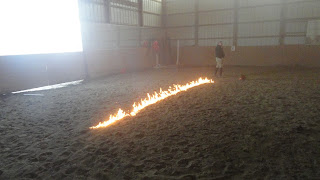 Which we had to walk our horse through.
Jasper had other ideas. 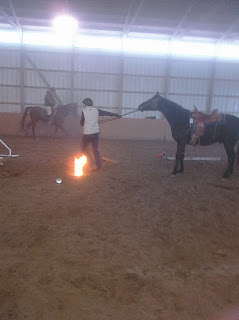 Eventually the horses walked through the fire too. 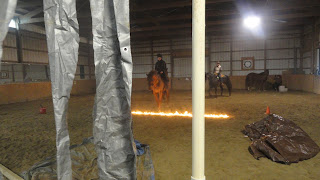 And we survived the course, got a certificate and came home exhausted and satisfied.
Posted by tagnrocky at 1:26 PM

I went through the mounted police training.....my Fox Trotter and I were scared! It was for a search and rescue team....